WEEKEND ROUND UP 23/24 JANUARY


There was 12 dedicated and committed athletes that were able to attend the club's new training session for our under 11's plus age group.  Lead coach Mark commented they all did well putting in a good effort.
Mark will be there next Saturday 1045 to 12 at our clubhouse, EK Sports Club.
Let's keep this enthusiasm up!

http://www.parkrun.org.uk/victoria-juniors/results/latestresults/
Posted by Richard Lawton at 17:58 No comments:

From Saturday 23rd January 2016 we are going to pilot an additional training session for the under 11 and under 13-20 training groups for the next few months.
Mark Saez who normally coaches the under 9s will be the lead coach for this pilot.
The meeting point will be our clubhouse, where we normally meet on a Wednesday, and the session will start at 10:45am and finish for 12pm.
There is no extra cost involved with putting this session on and we want to focus on increasing fitness and technical ability of the older athletes.  With having this extra session means athletes can do more of the same thing and new training to their benefit.
This is not compulsory so don't feel you have to bring your child along and the resources are still low for coaches and parent helpers so if you have the time please see if Mark could benefit from you volunteering your time at the session.
I will send this out by email as well.
Thanks
Richard
Posted by Richard Lawton at 18:52 No comments:


With EKFC getting to the 4th round of the Scottish Cup and the added bonus if the win they could play Celtic in the fifth round, Calderglen Country Park is going to be busy on Wednesday night.
They are playing Lothian Thistle Hutchison Vale at K-Park and the kick off is 7:45pm.  For one night only Calderglen Harriers training this week will have a different venue.
We will meet at the Dollan Baths cafe which is situated on the right hand side as enter the main door.  Sarah will be there set up to take the register and all our training groups will do their session on the paths and hills around the Dollan Baths.
I know for some it might be exciting coming to a new venue but please can you make sure your child behaves on arrival and when getting picked up.  They are representing the club and I don't want to get any complaints from the Dollan Baths.  I am sure this won't be the case and everyone will be on their best behaviour.
So will see you all at the Dollan Baths at 6.30pm and the session will finish at the usual time of 8pm. Parking is free after 5pm.

Thanks
Richard
Posted by Richard Lawton at 18:31 No comments:

In its 3rd year, East Kilbride AC hosted its now annual open cross-country races on Saturday 16th January. Based at O'Cathian Farm, Hay Hill Road, Jackton provided a challenging course in its own right with 3 hills in a lap and tough under foot conditions running on agricultural land with entrenched tractor tracks.  This was all compounded today with heavy snow fall, minus frozen temperature, my car measured -1c, and the snow increasely getting worse during the mens race.
This year we 6 junior harriers and 1 ex-harrier in action  at O'Cathian  Farm in Jackton. They were Libby Currie, Rachel Jones, Lewis Moir, Kai Wheeler, Gavin Herbertson, Louis Blake and ex harrier Cameron Green now running with Giffnock North.
First race up was the under 11s, girls and boys, who both ran a 1k distance. Libby Currie and Rachel Jones taking part in the field of 36 runners. First Harrier home with a great time and position was Libby in 3rd place overall in 3:14 and next was Rachel Jones in 4:04. Well done 2 both girls.
Next up in a field of 52 runners was the under 11 boys with Lewis Moir, Kai Wheeler, Gavin Herbertson and ex- harrier Cameron Green.  Lewis Moir was the first Harrier home in 3:25 in 26th place and a 31 second Pb from last year's event.  Next was young Kai Wheeler in 4:01 and 43rd and then Gavin Herbertson who was in 46th place with a time of 4:12.


The final Harrier was Louis Blake running a 2.1k course in the under 13s which was 1 big lap.  Louis ran a great race finishing in 9:37 and a top twenty position of 13th.
So well done to all  athletes that took on this challenge and I am glad to see young Harriers out competing its all part of training to be better runners.
Richard

The East Kilbride XC race will be at O'Cathian  Farm, Hay Hill Road, Jackton, G74 5AN. Details are:


Entry is on the day only and needs to be made by the athletes themselves rather than by the club.  Declarations are open from 11am with first race at 12:30pm.  Entry fee is £3 up to and including under 17s. £5.00 all other competitors, £7.00 non SAL members.  Prize list for all ages.
If you are entering I would prefer athletes to wear the Calderglen Harrier running vest.  They can be bought for £12 but I do have a selection of small vests that would suit most under 11s and small older athletes. Please ask me for one at training on Wednesday.

Regards,
Richard
Posted by Richard Lawton at 09:00 No comments:

It was a big day in our capital on Saturday 9th January.  The main event was the Great Edinburgh Cross Country with international athletes from GB & NI, USA and Europe.  Team GB & NI had various Scottish based athletes in the team like Callum Hawkins & Andrew Butchart and one big British presence Mr Mo Farah!  Along side these events were junior international events and Scottish Athletics Inter-District championship - http://www.scottishathletics.org.uk/inter-district-action-from-holyrood/
With international and local championships going there was also events for adults and kids to take part in.  Our own Calderglen Harrier rising junior star was young Lewis Moir who ran the Junior Great Edinburgh Winter Run.  It was 2.5K and he ran 11min 29sec. He came 35th out of 112 boys in his age group and his time was 1min 21 sec faster than last year so he was happy with his run. http://www.greatrun.org/great-winter-run/junior-great-winter-run
Well done Lewis and thanks to Mum Lynsey for letting me know and the picture.
Posted by Richard Lawton at 22:12 No comments:

PARKRUN ROUND UP 9th / 10th JANUARY

77 runners in the field.  All three runners have improved their time since last weekend's parkrun, well done.

http://www.parkrun.org.uk/victoria-juniors/results/latestresults/
Posted by Richard Lawton at 13:35 No comments: 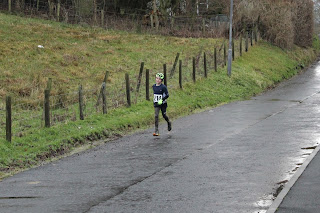 Kai Wheeler took part in a locally organised race on Broughton on Saturday 2nd January.  There was events for both senior and junior runners with Kai taking on the junior event.
It was 1.5 miles course starting in the Broughton brewary car park through a school, over a wall, across a football pitch, over a fence, into a small but deep river, through a muddy wet marshy field, across another road, up through a mudbath of a field, turn at the base of the hill and back to the road and cheered all the way to  finish in the village.
Kai's finishing was 16:16.  Well done Kai for running this hill running race and doing the 2k parkrun the next day.
Thanks to Mark his Dad for pictures and info. 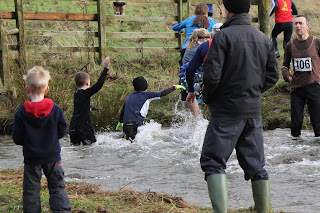 Posted by Richard Lawton at 21:57 No comments:

PARKRUN ROUND UP 2nd / 3rd JANUARY

71 runners in the field.  Well done and great way to start the new year.

Posted by Richard Lawton at 21:35 No comments:

Happy New Year to all young athletes, parents, coaches and parent helpers at Calderglen Harriers.
Lets have a fantastic 2016 with more training, more racing, all the help and support we can get and make 2016 an enjoyable, successful and fun year for the young athletes.
Training restarts on Wednesday 6th January at the usual time of 6:30pm to 8pm

For those that never took up the option to pay membership fees through standing order, fees are now due and should be given to Sarah on Wednesday.
Richard
Posted by Richard Lawton at 18:49 No comments: